Are You Okay Daddy?

Big feelings from little ones

Some days, it just doesn’t pay to be an adult.Your boss gives you another project. A client rejects your work. And as you walk towards your car, you see that the slow leak in the tire has finally become a full-fledged flat. When you arrive home, there is nothing to do but sit on the couch and turn on the television.
Then you notice your toddler standing a few feet away, her brow furrowed with concern. She wobbles toward you, climbs into your lap, and asks, “Mommy, are you okay?” Then she does what she does best—she hugs you. And of course, it works like a charm. You feel better right away. She’s showing you empathy. And she’s only two years old.

We all may be born with a biological bent toward empathy. Babies start at birth with the ability to respond to the emotions of others, imitating the facial expressions of their caregivers or bursting into tears if they hear another baby cry. By three months, babies respond differently to happy faces than to sad faces, showing that they can tell the difference between them (Izard, et al., 1995). These responses aren’t really empathy yet, but they might be some of the first steps on the path to sharing the feelings of another person.

By the time their first birthdays arrive, young children are going through big changes. Let’s say two babies are playing. On his way to grab a new toy, one little boy stumbles and falls, hurting his leg. What will t the other one-year-old do? Will he notice? Will he pay attention?

He not only notices, but he begins to look quite concerned. He might furrow his brow or stick out his lip. He might be feeling scared himself, wondering if something bad will happen to him. These responses are part of another step in the growth of empathy.

In one research study, one-year-olds were shown videotapes of other children crying. The one-year-olds began showing signs of distress, usually by sucking on their hands, their shirts, or a toy (Ungerer, et al., 1990).

Feeling distress when another person is troubled isn’t quite empathy, because feeling bad for yourself doesn’t necessarily mean that you feel bad for the other person. But seeing another person crying, and then feeling troubled by it, is moving closer to what we call empathy.

From hugs and kisses to band-aids

Around a child’s first birthday, something almost magical happens—a child begins to show concern for others. One research study looked at children’s responses to emotions as they grew through three age ranges: 13-15 months old, 18-20 months old and 23-25 months old (Zahn-Waxler, Radke-Yarrow, Wagner, & Chapman, 1992).

Here’s what they found:

A word of caution

Although this research tells a wonderful story, we have to keep something in mind. Even though children as young as 12 months can show empathy, it doesn’t mean they will show it all the time. Sometimes young children might not show any empathy at all, and at times they might even laugh when they cause another person distress. It’s important to remember that they are learning about how emotions work, and they will get better at showing empathy as they grow.

Show empathy to your children

Research shows that parenting with empathy and emotional guidance encourages healthy emotional growth. Children are also some of the best copycats around, and they are likely to copy the ways they see you treat people.

Provide simple, clear explanations about how other people feel when they are sad or hurt. This is e especially important if your child has caused these feelings in another child (“Carlos feels bad when you call him names”). When this happens, be firm as you explain how these feelings work.

Praise your child’s early expressions of empathy. They are wonderful signs of learning to care about other people. When your child gives up his favorite toy to a younger sibling who’s crying, make sure he knows you appreciate his action.

Don’t expect empathy every time. Young children are still learning how emotions work, and how people get along with others. Encourage empathy, but don’t expect perfection. 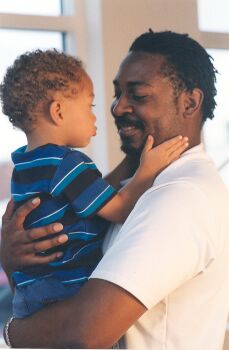