I’m not too young to be embarrassed

Sammy is 20 months old, and he just got a new outfit from his grandmother. She helps him put it on, and then stands back to look at him.

“Isn’t he cute in that outfit?
Everybody look at Sammy in his new outfit!”

Sammy smiles, but he’s clearly not comfortable with all the attention. Nervously, he looks down and plays with a button on his shirt. He looks around the room, glancing at people, and then looks away again.

Sammy is embarrassed. A few months ago, Sammy might have happily danced in front of a dozen adults, but now his reaction to the attention is different. Embarrassment is a feeling that comes when children are aware that they have become the object of attention (Lewis, 2000). His father, seeing this embarrassment, takes Sammy out of the spotlight and together they play with a toy.

For parents and caregivers, Sammy’s new reaction to his family’s pride is a moment worth celebrating. Sammy’s embarrassment shows that he has reached an important new stage in his emotional and cognitive development: he’s become more self-aware. Research has found that embarrassment occurs only after self-recognition develops (Lewis, 2000).

Who is that in the mirror?
Most babies love mirrors. If you hold a baby in front of a mirror, she may smile, pat the glass, or even try to kiss her reflection. But young children do not know who the person in the mirror is. She may even think her own reflection is another baby. When are children able to recognize themselves and how do scientists study this? Let’s find out how mirrors make great scientific tools! You can even try this at home!

That’s Me!
In one experiment, researchers asked a group of mothers and their babies, ages 9 to 24 months, to play in front of a mirror. First, the researchers watched to see how each baby acted when placed in front of a mirror. Next, each of the mothers pretended to wipe dirt off her baby’s face—but they were really putting a small dab of red makeup on the tip of the baby’s nose. Then the babies were placed in front of the mirror again, to see what they would do. Would they notice the red spot on their noses? Would they recognize that something was different about their faces and try to wipe off the red spot (Lewis & Brooks-Gunn, 1979)?

It takes time to recognize “me!”
Before they’re 15 months old, babies don’t seem to recognize themselves as themselves in the mirror. These babies stared at their reflections and may have found them familiar, but they didn’t react any differently when they saw the red spots on their noses. But by 21 months, most infants tried to touch or wipe their nose. These babies knew that they were the baby in the mirror! They had reached a new level of self-awareness and recognized themselves (Lewis & Brooks-Gunn, 1979)!

Researchers also studied children’s self-awareness as a way to learn about emotions such as embarrassment. First, they used the makeup test to see which of the children tried to touch or wipe the red spots on their noses. Then they over-complimented the children to see if they would get embarrassed. For example, the children were told many times that they were smart, cute, had beautiful hair and lovely clothes. Other children were asked to dance in front of a group of unfamiliar adults. The children who touched their red noses in the mirror were the only ones who showed embarrassment. Those who didn’t touch their noses did not show signs of being embarrassed (Lewis, Sullivan, Stranger & Weiss, 1989).

These experiments show that a certain level of self-awareness is needed before children experience emotions like embarrassment. Once children are aware of themselves as individuals, they become more sensitive to the ways people might see them. They also become more aware of how people think differently, and that other people might have feelings that are different from their own. This awareness provides a foundation for emotions like empathy and envy (Lewis, 2000), which is part of a child’s social and emotional development.

New feelings for toddlers
As children near their second birthday, they show another amazing stage of development. It’s called self-recognition! Share in the new experiences your child is discovering and the new feelings that are emerging. This is a great time to help your child learn how to handle emotions. By sharing these new emotions, you’ll have new opportunities to grow closer to your child. 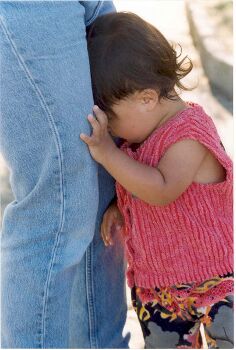