PrevPreviousUses Pronouns (I, you, me, we, they) And Some Plurals (26-36 Months)
NextTwo Languages Spoken HereNext

Is that babbling and cooing designed just to make us melt?

The house is quiet. The baby has gone down for her nap. Finally, you’ve got a chance to catch up on the chores. But what’s that you hear over the baby monitor? Is that your little girl talking? She’s only eight months old! You always knew she was remarkable.

You hurry to her room and quietly open the door. There she is all right, lying in her crib, happily chattering
away. “Bababababa. Dadadadada” she burbles, catching sight of you. “Eeeee!”
All right, so they’re not her first words. What are they?

Sometime around seven to eight months of age infants start to babble. These consonant-vowel combinations, like “ba”, often include facial expressions, such as smiles or frowns. Babbling is your infant’s way of playing with sounds and language (Gopnik, Meltzoff , & Kuhl, 1999). They are learning to use their lips, tongues, mouths, and jaws to make sounds before they make words.

Repeat after me
Think about your own attempts to imitate another language. If you hear a Spanish-speaker say gracias you may pick up the rolling “r” sound, but do you know immediately how to make the sound yourself? It takes a bit of practice to get your tongue in the right position. Think of a baby trying to learn how to speak for the first time.

How does an infant learn how to make the sounds he hears? Perhaps by babbling and copying the grown-ups around him.

Scientists think babies’ babbling aren’t simply random sounds strung together in an unbearably cute fashion. But rather, babies are learning how to move their lips, tongues, mouths, and jaws to make the sounds they hear you make (Gopnik, et al., 1999).

Babies have a powerful ability to learn the language (or languages) they hear and adults are very well-suited to help babies learn. The special way we speak to babies, such as getting up close, drawing out our vowel sounds and pitching our voices high, seems to be just what infants want and need when it comes to sorting out the sounds of speech (Gopnik, et al., 1999).

By the time an infant is six months old, the average American baby has heard hundreds of thousands of examples of the vowel sound “ee,” as in “daddy,” “mommy” and “baby.” Researchers think that from these thousands of examples, babies develop a type of sound map in their brains that helps them hear the “ee” sound clearly.

In a way, babies create perfect examples of speech sounds in their heads, with a type of target area around each sound. With their sound map for “ee,” for example, babies learn to pick out the “ee” distinctly from the other sounds they hear. Sounds close to the “ee” sound may be in the “target area” around the perfect example, and the baby still hears them as an “ee.”

These perfect examples of speech sounds, called “prototypes,” have a profound effect on how babies hear speech and how they babble. They help “tune” the child’s brain for the language around him, so that he can hear the diff erent sounds of speech clearly. Even when adults don’t speak clearly, babies seem to compare the mumbled sounds in grown-ups’ speech against the prototypes in their brains and figure out what they’re saying.

By the time they’re six months old, babies who hear the sounds of their culture’s language have developed a set of speech sound prototypes they can use as building blocks when they begin to put together their own words, usually sometime around 12 months (Kuhl, Williams, Lacerda, Stevens and Lindblom, 1992).

They’re sounds and they’re exciting
Be careful what you say because babies love to imitate the sounds they hear adults make. This is why babies around the world seem to babble using the sounds of their families’ language. In one research study, three- to five-month-old babies watched and listened to films of an adult making vowel sounds. With a total of only 15 minutes of exposure (over three days, five minutes at a time), even some of the youngest babies tried to imitate the adult speech, making similar, if not perfect, copies of the sounds they heard (Kuhl & Meltzoff , 1996).

Even at these very young ages, babies may be developing what scientists call a “mouth-to-sound map,” figuring out that different sounds are made by moving their lips, tongues, mouths, and jaws in different ways.

And babies aren’t just using their listening skills to figure out language. They also seem to use something similar to lip reading. Scientists have discovered that babies would rather look at the face of a person who is saying the vowel sound the babies are hearing than see a face and sound that don’t match (Kuhl &  Meltzoff , 1982).

What babies who are learning about speech need is someone to talk to. And that someone is you!
When they babble, babble back!
There’s nothing quite as endearing as a happily babbling baby. And knowing that these sounds may be helping your baby put together the building blocks of speech is an added bonus. But to grow from babbling to meaningful speech, your baby needs a good teacher. So when he babbles, babble back. But don’t limit your conversation with baby to cooing and babbling. Talk to your baby as much as you can. You are teaching him the sounds of words and connecting with him at the same time.

Enjoy these early conversations with your baby. At first, you may not be able to understand his brand of babble, but the words will come soon enough. In the meantime, get up close, and let your baby see and hear how it’s done. 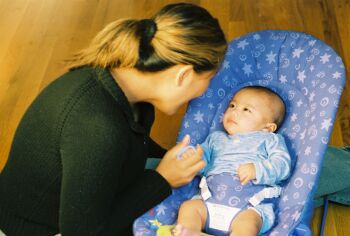