PrevPreviousFirst words are often spoken at this time (12-19 Months)
NextKeep Talking: The Importance Of Conversation (12-60 Months)Next

Naming objects is the First step

If you’ve spent much time around young children, you’ve probably had conversations like this:

“Look, Briana: A balloon! A big red balloon
floating in the air. Can you say balloon?”

During the first year of life, conversations with Briana usually follow a pattern. Mom and dad point to different objects and say “flower,” “cat,” or “bear.” Briana looks and babbles in a way that begins to sound like words. Then, around the time she turns one, it finally happens. Briana says her first real word. And for the next six months or so, Briana slowly builds her vocabulary as she practices saying words over and over again.

Sometime around 18 to 24 months, her parents notice an amazing change. Briana not only looks at the objects being pointed out to her, but she also starts naming them after hearing them only once or twice.

“Book,” “dog,” “kitty,” she says. She even tries out an entirely new phrase. “What’s that?” she asks, pointing at the helicopter. “What’s that?” she demands, waving toward a tree. Suddenly, it seems like the questions never stop coming. More than that, Briana remembers the answers.

What used to take weeks of patient repetition now seems to take only one quick reply. It’s a ball, a cat, or a cookie, and she doesn’t need to be told twice. Research shows that parents and caregivers can play an important role in a child’s word learning. Researchers have found that parents who talk often to their children and use a rich vocabulary to name and describe things help their children develop a larger vocabulary (Hart & Risley, 1995).

A sudden rush of words!

Sometime around the age of 18 months, many children experience what researchers call a “word spurt” (also known as a word or naming explosion). Word spurt is an increase in the rate at which children learn to say new words (Hoff, 2001; Goldfield & Reznick, 1990). In other words, the young child is learning new words quickly and many of these new words are names of objects like cup, ball, dog, doll, truck, etc.

Around 18 months, when many children can say about 50 words, most children also begin using new words after hearing them only once. Whether children learn words in a rush or more slowly, by the time they reach their second birthdays, they’re typically using around 250 to 350 words. Only six months later the word total nearly doubles to about 600 words (Fenson et al., 1994).

Children use special strategies to learn language. For example, one experiment tested the ability of 16 to 20 month-olds to learn new words after hearing them just once, something researchers call “fast mapping” (Mervis & Bertrand, 1994).

The scientists showed children a group of five objects. Four of the objects were familiar to each child: a ball, a car, some keys, and a dog, for example. The fifth object was new—a garlic press or other kitchen tool. The researcher then asked the child for one of the familiar items; for instance, “May I have the ball?” Once the child pointed to or grabbed the ball, the researcher asked another question, “May I have the lep?” Children who could “fast map” knew that the new word “lep” referred to the “new” object in the collection, the garlic press. At some point, children learn that “new” words refer to “new” objects (Mervis & Bertrand, 1994).

The researchers found that the children who could learn words this way had bigger vocabularies than those who couldn’t, which meant that these children had probably gone through a word spurt. A follow-up study of the children who originally could not learn words this way showed that once their vocabularies had grown, they too could learn by fast mapping. The results suggest that fast mapping and the word spurt are closely related to one another (Mervis & Bertrand, 1994).

So how do children develop the ability to learn a word after hearing it only once? Some researchers think that children gain new insights into words and language when they are around 18 months old. Most believe that children come to two realizations: Words are names for objects and every object has a name. Scientists call this new understanding the “naming insight” (Gopnik & Meltzoff , 1997).

In addition, some scientists think that when young children realize that all objects have names, they also begin sorting objects that are similar into categories. In one experiment, children were shown a pile of eight objects, with four objects of one type (like small plastic boxes) and four objects of another type (four balls). Then the researchers watched what these same children did from ages 15 months to about 20 months (Gopnik & Meltzoff , 1997).

At around 16 months, many of the children would point to all the balls or all the boxes, and some would put all items of one type together. But by 17 to 18 months, the children would make two separate piles, one with the balls and one with the boxes (this experiment also used different types of dolls and cars).
When the children were younger they seemed to recognize the differences between the objects, but only when they were older did they actively sort the objects into separate categories. And this active sorting was strongly related to the children’s word spurt (Gopnik and Meltzoff, 1987).

Whether or not your child experiences a word spurt is not something you can control. Many children show these spurts, but some children don’t and they still learn to speak normally. 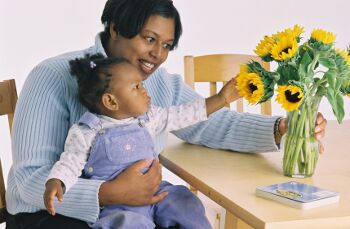