Babies can remember a lot

For decades, scientists didn’t think babies could remember much. Although parents and caregivers suspected that more was going on inside their young children’s heads, many “experts” thought babies experienced the world as simply a blur of sights, sounds, smells and textures.

Babies and toddlers can remember a lot. And they can remember some things for a surprisingly long time. Remember that all children are different, and each child’s development may not match this exactly.

How long can babies remember what they are shown?
In one series of experiments, researchers wanted to learn if 12-month-old babies could remember what they were shown after delays of three minutes, one week, and four weeks. Researchers first showed groups of babies’ five different toys and a unique way to play with each of them, like pulling apart a dumbbell-shaped toy or making a stirring motion with a wooden stick inside a box. After showing these babies unique ways to play with the toys (20 seconds for each toy), the researchers removed the toys from the room. The researchers also made sure that the parents never saw what the babies were shown so the babies couldn’t practice at home (Klein & Meltzoff, 1999).

Other groups of babies in the experiment were shown different things. Some babies watched adults do different interesting things with the five toys, and other babies never saw any of the five toys. Later, the  researchers placed these toys one at a time in front of the babies to see what they would do (Klein & Meltzoff, 1999).

The researchers in this study did three seprate experiments, which are combined and summarized here.

Groups of babies that were not shown the special ways to play with the toys still figured out a few of these ways on their own. Overall, these babies used about 1.5 (about 30%) of the five special ways to play with the toys.
Even after four weeks, 12-month-old babies could remember and copy about half of the things they were shown—and they saw each unique action for only 20 seconds! Also, this study doesn’t suggest that babies can remember and copy what they see for only four weeks, but for at least four weeks. They may remember what they were shown even longer (Klein & Meltzoff, 1999). 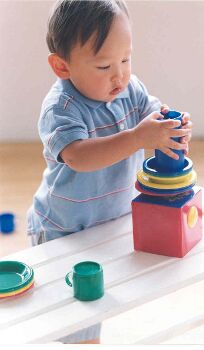