I Want My Mommy

I don’t know you!

Scotty is eight months old, and he’s a cheerful and outgoing baby. He always smiles at people and delights in experiencing the world around him.

When his mother brings in a new babysitter, she’s surprised by her child’s reaction. Not only does Scotty fail to smile and respond, but as the sitter reaches out to touch him, Scotty clings closely to his mother and begins to whimper. A few minutes later, when mom tries to leave the room, Scotty’s distress turns into full-blown sobs. What happened to her happy, outgoing baby?
I’m scared
Scotty’s reactions to the new babysitter are normal. By around seven to nine months, most babies begin to show fear. Often this fear shows up when babies see unfamiliar people, like a new babysitter or a family member they haven’t seen for awhile. This fear is called “stranger anxiety.” Babies also begin to show fear when their parents or caregivers leave them with others, even if it is at home or some other familiar place. This fear is called “separation anxiety.” Although these fears can seem troubling, don’t worry—children around the world develop these fears at about the same age.

Why does fear develop around seven to eight months? Some researchers believe children begin to show fear when they are able to compare something they know and remember with something they don’t recognize. In this view, stranger anxiety is a result of children’s increasing ability to remember and recognize familiar faces and places. In other words, as children get better at knowing the difference between familiar and unfamiliar faces, they may become more fearful of faces they don’t know (Lewis & Haviland-Jones, 2000).

Others believe that fear is more biologically “programmed.” For these researchers, an unfamiliar face or situation is a natural clue to danger. They believe infants may be programmed to fear strange faces and settings as part of a survival strategy, because any strange or unfamiliar creature could be potentially threatening (Bowlby, 1973; Shaffer, 1999).

Whatever the reason, stranger anxiety is a normal part of a child’s development that begins around seven to nine months. For example, one study observed a group of babies as they grew from age four months to twelve months. Here’s how it worked:

Each month, researchers watched the babies’ reactions as they were approached by someone they didn’t know. These strangers walked up to the babies, greeted them, picked them up and held them. At eight months old, even with the mother present, many children began frowning, whimpering or crying with the stranger. By nine months, 79% of the babies showed fearful reactions (Emde, Gaensbauer, & Harmon, 1976).

In another study, researchers have found that how a stranger acts made a difference. When the strangers approached more slowly and didn’t try to touch or pick up the baby, babies showed less stranger anxiety. The same was true when the mother or a familiar caregiver was present (Sroufe et al., 1977).

“But why does my 11-month-old start crying and fussing when I leave her with an unfamiliar babysitter?” There’s nothing strange about the person or the place, yet her reaction is much different than just a few months ago. This is separation anxiety. It usually appears somewhere between six and eight months, gets stronger at about thirteen to fifteen months and becomes less frequent and less intense as the baby gets older (Kagan, Kearsley & Zelazo, 1978).

Most young children get upset when their mothers or other familiar caregivers leave them, even for brief periods of time. As children grow to feel a strong attachment to their parents or caregivers, seeing them leave is scary. And while it may be heartbreaking for a parent to leave a crying child, the child is actually showing that she has reached an important developmental milestone. The young child feels an emotional bond to the parent and that is a good thing!

When leaving your child with someone, communicate to your child that he will be safe and that you will be back soon.

Being afraid is no fun

Children are unique, and they will respond in different ways to strangers and to being separated from you. Fear is a very normal reaction – just another part of growing older. Be open to trying different things as our child develops, and trust your instincts. As your child grows, remember that these powerful fears—and the tears—will fade over time. 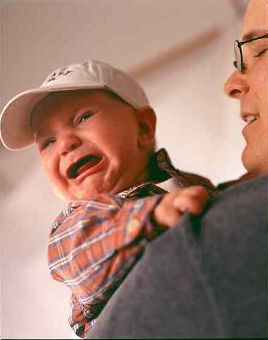